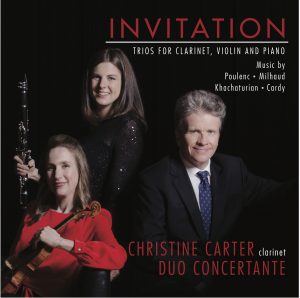 This New Year newsletter/blog is a bit tardy….  An 8 city China tour in December, immediately followed by the holidays where our expectations as parents kick in, and then concerts in early January with eight major pieces to prepare, distracted us a bit from sending out a timely message! 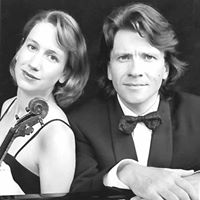 It’s pretty hard to believe that we officially became Duo Concertante some twenty years ago this season. Here (at left) is one of our very first promo shots taken by Sheilagh O’Leary which we used during our very first tour to ON.  We’ve returned to many of these venues over the years, which is always meaningful, and one of these –  the Kitchener Waterloo Chamber Music Society – where we’ve played over a dozen time, will see us next week with our clarinettist friend Christine Carter. And we’ve just released with her Invitation, an album of trios by Milhaud, Khachaturian, Cardy and Poulenc which we’re pretty proud of.

So far, it’s been a busy and fun 2018-19 with over 35 recitals throughout Canada, US, Germany, the U.K. and the far east. China was especially memorable with its gigantic cities, 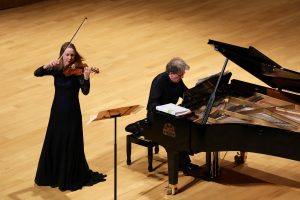 lovely halls, (here we are in Beijing) friendly people, and, of course, amazing food. A typical day on the tour was: get up at 6 am, go to the airport, fly 2-4 hours to another major city, go to hotel, go to hall, warm up, play concert, go to hotel, sleep and repeat.   (We were a tad worried about the political situation between Canada and China which intensified as we were there (and continues to be heated), but thankfully we made it home.  Our wonderful tour manager ran things like clockwork –  from planning complicated itineraries to keeping us healthy and fed with fabulous, fresh food.

Since the beginning of Duo C, playing new Canadian music has been a “thing”. This year we commissioned two new pieces – Frisson by Randolph Peters and a major work by Melissa Hui will follow in 2019. These pieces join the 35+ plus works that we’ve commissioned (often with the assistance of the Canada Council) and premiered since 1998. We are thrilled that many of these have become a regular feature of new Canadian violin and piano programs by a younger generation of players.

Over the years, we’ve also loved focusing on complete cycles… first all the Beethoven sonatas, then Bach’s. Recently we’ve been recording the complete works for violin and piano by Schubert. Summer 2018 we put the Fantasy (Is that most difficult but also most beautiful work ever written for violin and piano?), Rondo Brilliante, and D major Sonatina “in the can” and this June we will finish up at the Glenn Gould Studio with the A major Sonata and 2 other Sonatinas.  It’s been a super rewarding project and such a treat to play these exquisite pieces.

Another 20thanniversary milestone approaches in a year and a half – that of the Tuckamore Festival where we are Artistic Directors. This festival has grown from a two-week festival of four concerts to one with 30+ summer events and school concerts and other outreach activities that spill into the regular season. With the guidance of a great manager and excellent board, Tuckamore has been able to bring world class artists to audiences in Newfoundland as well as provide exceptional opportunities to over 350 emerging musicians and composers.  This summer, as part of Tuckamore, the Duo looks forward to travelling to central Newfoundland with actor/playwright Robert Chafe in a musical dramatic work that celebrates NL’s joining Canada 70 years ago.

The most noticeable change for us after twenty years is that instead of touring with a baby and toddler, we share our lives with two pretty darn awesome almost adults, Clara and Sasha.  They’ve always incredibly good sports about tolerating the craziness of our lives and we’re so glad they don’t mind the fact that they are being able to hum every major violin and piano work by heart.