So far we’ve commissioned over 35 new Canadian works and we usually program one of them on every recital we play. We also have recorded 3 CDs devoted entirely to new music written for us. Except for some family members who can be relied upon is to say things like “Are you going to be playing any of that weird music on that concert?”, we’re never quite sure what the reaction will be when 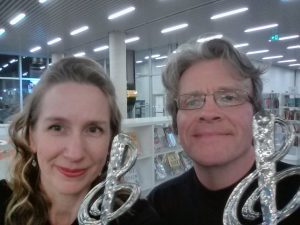 we put a new work between some Bach or Beethoven. Ditto for when we make a record of all new Canadian pieces. So we were doubly thrilled when Incarnation was not only selected by CBC as one of the top ten classical albums of the year (and that’s a pretty broad category mind you) but also won Classical Album of the Year at the ECMAs. Thanks goes to the five great composers – Chan Ka Nin, Denis Gougeon, Alice Ho, Jocelyn Morlock and Andrew Staniland – who inspire us with their bravery (yes, bravery. It takes bravery to be a classical composer), imagination, beautiful art, and originality.

We recently added another wonderful new work to our repertoire – Frisson – by Randolph Peters. Usually when we commission a new piece, we’re sent the music and then if we’re lucky the composer might hear it at the premiere. But most times there’s not too much collaboration. This time, however, Randolph and the Duo thought it might be neat to document the process of writing and learning a new piece. We created what we think is an interesting video using material from interviews, the score, a workshop with students at Memorial University, and, of course, the premiere performance. By the way, the word “frisson” means “a sudden strong feeling of excitement or fear” and describes the goosebumps you might feel at a climatic, intense musical moment. Randolph gave himself the challenge of trying to write a piece which causes a frisson moment in the listener. So you know, that is suppose to happen at about 12:17 in the video. And if it didn’t do that for you at this premiere performance, we promise we’ll nail it when we record it on our next all Canadian CD!