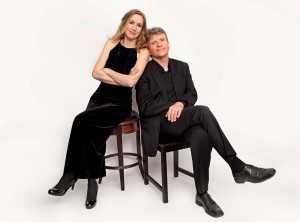 We’ve devoted 15 years to the duo repertoire, approaching it as a true musical partnership between two equals. Here are some sample programs which feature great duo repertoire.

1. Complete Beethoven
Duo Concertante can perform all 10 of Beethoven’s Sonatas for Violin and Piano in three evenings or one evening featuring three of these great masterworks. They toured with these masterworks as part of their 10th anniversary season in 2008. The Duo has recorded all of the sonatas for Marquis Classics to be released in April 2013.

2. Complete Bach
Duo Concertante can perform all six of Bach’s Sonatas for Violin and Keyboard in two evenings along with commissioned works by Clifford Crawley and Jacelyn Morlock celebrating Bach’s legacy.

3. All’s Fair in Love and War
Impassioned works by Prokofiev, Schubert, Saint-Saens, and Mozart inspired by love and war are woven together with a terrific script by Paul Rice.

5. Shall We Dance!
Narrated by Evelyn Hart, this program features dance music ranging from waltzes to tangos, sambas, tarantellas and sarabandes.

6. Encore!
Here are a few of our encore pieces which were arranged for us by Cliff Crawley. They make a great program on their own or can be incorporated into more traditional programs.