There are some things we’re always going to remember about 2013:

– The thrill of playing in Carnegie Hall and the hair-raising few days before! (Read bottom of our blog for the blow by blow if you haven’t already). We know we’ll never forget that!

– Releasing the Beethoven album. Of course, we’ve written about this already but as part of saying good-bye to 2013 we want to thank the team that made this album possible – David Jaeger, producer; Dennis Patterson, engineer; Francine Labelle, publicist; and Earl Rosen and Dinah Hoyle at Marquis. We owe them much. We also want to share a lovely review we’ve gotten since the album’s European release in September– from the Wiener Zeitung.

– Premiering Vince Ho’s Maples and the Stream at the Ottawa International Chamber Music Festival. Evelyn Hart was truly extraordinary. She memorized the entire 30 minutes of text, always knew exactly how it fit with the complex score (what a musician she is!), staged and directed the entire piece, and ultimately mesmerized the audience with her intensity, energy and authenticity. Vince’s evocative and masterful score communicated the depth, subtlety and subtext of the words by Lein Chao, but also provided a large-scale structural arc to her seven lyrical poems. Audiences both in Ottawa and Barrie were transfixed.

– Creating some new videos. Thanks to Rich Blenkinsopp and the School of Music at Memorial University for their expertise and assistance in this. We’re especially proud of the Bach Sonata no. 4, Sicilienne. (I first studied this with my wonderful teacher and the great violinist Masuko Ushioda, who, I am very sad to say, passed away in May. Playing it always makes me think of her.)

– Playing double concertos. We got the chance to play the Andrew MacDonald Concerto and the Mendelssohn Double. Always a thrill to solo with an orchestra. Here we are before and after the performance of the Mendelssohn with the NSO.

Which leads me to the Prelude section of this entry, or, what we’re looking forward to in 2014:

– Recording the MacDonald and Mendelssohn concertos! This was supposed to take place in December 2013 but our engineer unfortunately broke his hand! The sessions will take place in September 2014, and we expect the disc to be ready by Feb. 2014.

– Learning and performing all the Schubert violin and piano works. Our next big project starts next fall with concerts featuring the 3 Sonatinas, the Duo, Fantasy and Rondo.

– A new commission or two… more adventures with Evelyn… another recording (Bach Sonatas)… but we’ll leave these for another entry!
2013/12/18 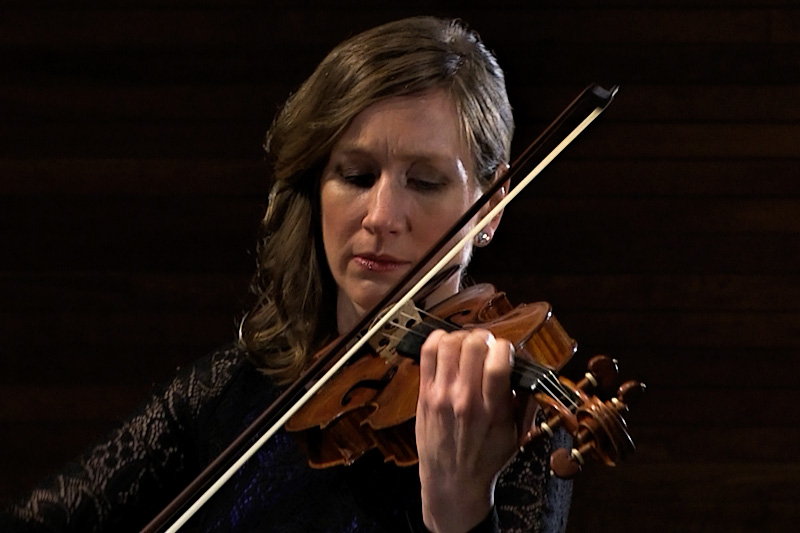 We look forward to the summer for many reasons. One of the most meaningful of these is the chance to work and play with exciting young talent at various festivals, concerts and workshops. First in July, Nancy goes off to Domaine Forget for a week of teaching (July 14-20). Following the Ottawa Festival where we play 3 concerts and give a master class (August 2-4th), we go straight into our Tuckamore Festival (August 5-19th). This year there will be 21 young artists from across Canada and the US studying and performing chamber music by Shostakovich, Smetana, Brahms, Beethoven, Schumann and Dvorak. They will be joined by two emerging composers who will take part in the festival’s newly added Young Composers program under the mentorship of award-winning Andrew Staniland. Following Tuckamore, we perform and give masterclasses at the Indian River Festival in Prince Edward Island (August 23rd and 24th). At the end of August we are thrilled to be soloists with the Nova Scotia Youth Orchestra (one of the country’s very best young orchestras!) in Andrew P. MacDonald’s wonderful Double Concerto under the direction of Dinuk Wijeratne. Concerts are in Lunenburg (August 29) and Halifax (August 30th). Good times!
2013/06/29

We really enjoyed seeing many friends, supporters, former students and some of their parents at our CD launch celebration/performance at Gallery 345 on April 22nd. We were delighted to receive several very positive reviews of the album. Here are some excerpts:

“The recording made at the Glenn Gould Studio last year is so good right down to the tiniest of details that it deserves to be called a reference in the contemporary performance of these 10 great pieces.” – John Terauds, Musical Toronto

“Their expressive performances have a refreshing clarity and feel for the symmetry of the music that is a joyous experience to hear. Nowhere have I heard a more detailed refinement in these sonatas. There is as much put into the lesser known works as those more well known.” – Classical-Modern Music Review

And we also had a lovely feature/interview in Digital Journal.

Many thanks to Francine Labelle, our publicist, for all your hard work, and to Ed Epstein at Gallery 345 for hosting a wonderful event!

April 24th and 26th saw us in Kitchener-Waterloo for two concerts which marked the first time the Duo played all the six Bach sonatas in close proximity. We paired these with two new Bach-inspired works – Comme de longs echoes by Cliff Crawley and Petrichor by Jocelyn Morlock. It was interesting to see how differently these two wonderful composers approached the task of creating a Bach-influenced piece. Cliff drew upon a number of famous Bach fragments, the notes of Bach’s name [B (B-flat), A , C, H (B natural)], modern dance rhythms, and he used a rich chromatic and contrapuntal texture to create a charming, whimsical, clever, and humorous piece.

Jocelyn attended the premiere of her piece and we were really glad to work with her prior to the performance. The word “petrichor” is defined as “the distinctive scent which accompanies the first rain after a long warm dry spell,” and the piece really conveys the restrained then increasingly ecstatic joy that rain can bring after a draught. (Jocelyn is now a Vancouverite but she was born and raised in Manitoba. She knows of what she writes!) The Bachian elements used here were a fragment from the first movement of the sixth sonata (down a seventh up a step), various trills and Baroque-like improvised-sounding melodic figures. Somehow — even though most of the Bach connections in the two pieces are quite hidden — these both work beautifully as companions to the set of six magical sonatas. Thank you Jocelyn and Cliff! (The audiences loved them too.) We feel the concept of programming Bach alongside new works works really well; we’ll be doing a similar program at the Ottawa International Chamber Music Festival on August 4th.

April 27th took us back to Toronto where we were happy to be a part of a CMC fundraising concert. Here we are being interviewed by David Jaeger alongside Jocelyn Morlock. This concert featured Morlock, Jaeger, Schafer and Gougeon. 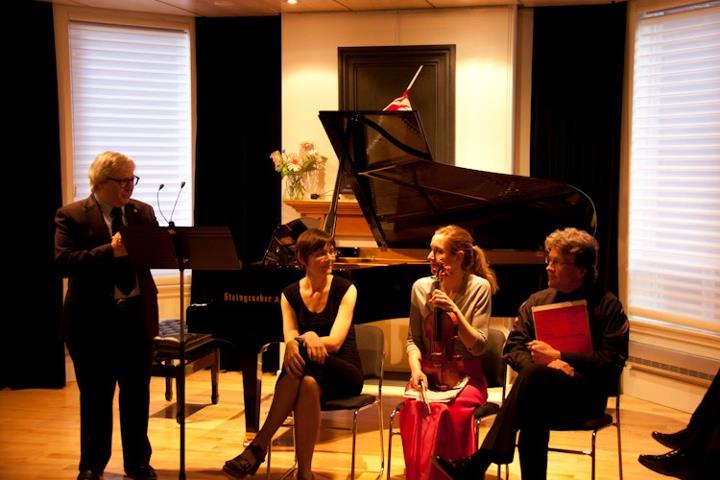 In Lunenburg Nova Scotia (Nancy’s hometown) the very next evening, we worked with Peggy Hemsworth, a producer for the CBC, who recorded this concert for the Musique Royale series for an upcoming radio broadcast. (A bit of a digression now follows…)
Turns out Peggy and a preteen Nancy were both members of the South Shore Concert Orchestra (imagine the Portsmouth Symphony times 2). This orchestra was Nancy’s first orchestral experience (she started private violin lesson at 10) and talking to Peggy sure brought back memories! In the late 1970, early 80s this community group had a total of eight violins, no violas, 1 cello, no bass. Some of the wind players doubled on two instruments; for example, a clever doctor managed to go between the French horn and clarinet depending on which part was most needed. The one section Nancy recalls being competent and well-fortified was the percussion section (which is where Peggy was playing timpani). However, the most vivid memories for Nancy revolve around her 93-year-old stand partner in the back of the second violins. Each rehearsal, Ruby would be led into the rehearsal by the arm by another member of the orchestra who also carried her violin. Once helped into her chair, she would be given her violin. Ruby never tuned her violin; in fact, her bow never made contact with the strings, ever. She would “airbow” over the string like a windshield wiper for the entire rehearsal. For two years, Nancy turned pages for Ruby (meaning that at the page turn, Nancy would stop playing to turn and their stand then produced no sound). On one fateful and momentous evening concert, in an arrangement of the Waltz of the Flowers by J Strauss (or something similar) and during a GRAND PAUSE: Ruby made contact with the strings in a big way .. it was quite the sound!

Now on to learning a major new work by Vince Ho, text by Lien Chao which will be narrated by the wonderful Evelyn Hart. We start work shopping the piece in a few weeks in Toronto and will premiere it on August 3rd at the Ottawa International Chamber Music Festival!
2013/05/08