Three in a Row

We were super surprised – not to mentioned SO delighted – to receive, for the third year running, the 2019 ECMA for Classical Recording of the Year. 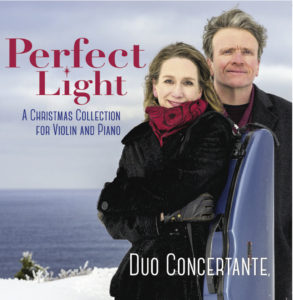 This special recognition, for our holiday album Perfect Light, was extra meaningful because of Clifford Crawley’s role in the album: he, for no other reason than we asked him to, wrote us an entire CD worth of magical, ingenious, and surprisingly original arrangements. Sadly, these would be the last works he composed before his passing in February 2016; perhaps all too fittingly, the final piece on the record is the fragment of “In the Bleak Midwinter” which Cliff was unable to finish.

“Original arrangements” doesn’t really capture the treatment Cliff gave these Christmas standards. While he used the tune as a starting point, he quickly took the listener to truly unexpected harmonies and styles (a ¾ piece became a rumba, or a single line melody transformed into a canon in a way that seemed pre-ordained).

In addition to his extraordinary creativity, Cliff truly understood the instruments he wrote for and created beautiful and idiomatic material for the violin and piano, and clarinet. Christine Carter deserves recognition for her beautiful playing on five of the tracks.  Cliff would always ask, with characteristic humility, if there was anything we’d like him to modify, urging us not to hesitate to make changes ourselves. There never was and we never did.

Cliff’s time in Newfoundland was a gift to many classical musicians in St John’s. (He had followed his wife, the distinguished ethnomusicologist Bev Diamond, when she came to MUN.) His generosity as a composer and arranger resulted in many, many premieres over his 10+ years in NL with new works for solo piano, voice, orchestra, and various chamber ensembles.  For Duo Concertante, Cliff wrote over thirty fivepieces. Every time we pull out one of these works and see his distinctive hand-written parts we are especially grateful for and cognizant of his talent, wit, warmth, and generosity.  With these parts in front of us and his music in our fingers, we feel him with us still.