Exhilarating UK/Germany tour, or, “I’m sure I can remember how to drive a stick shift”

When you have a long tour, and I consider 18 days on the road long, you do your best to plan ahead – line up all the flights, trains, accommodations, practice space, rehearsal times, etc. weeks or months before. But the unexpected happens – good and not so good – and in the end, like in life, you just kind of have to just go with the flow.

Take for example our first five days in London. We intentionally arrived there a few days early so we’d have time to rehearse with cellist, Heather Tuach for a Conway Hall trio concert. When we play in London we always stay at a lovely place that is part of the University of London near Russell Square. We especially like it because they let us use their practice rooms free of charge. One of the big challenges of touring as a pianist is still finding somewhere to practice on the days between gigs. So this place was always perfect for a longer stay. However, this time, due to renovations taking place in their main building, we couldn’t use the pianos. Happily one of our colleagues from St John’s was able to arrange a piano for us to use in a friend’s flat way across town. Then London had a Tube strike. So practicing was not an option and the streets were clogged with taxis going nowhere. So Tim walked the 8 km to and 8 km back in order to practice (….and then he developed plantar fasciitis). 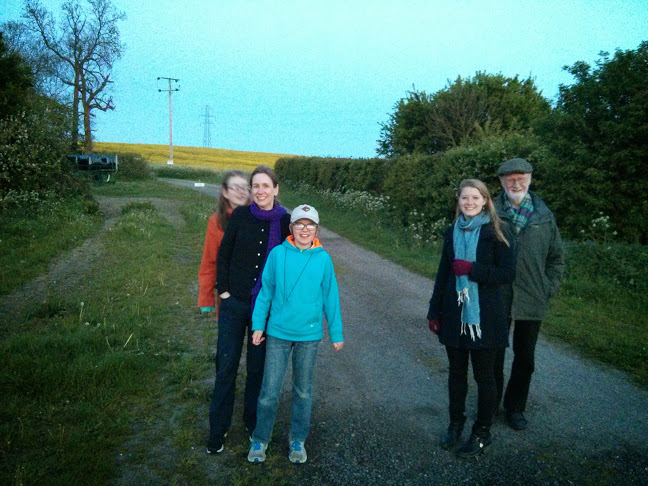 Walking in the countryside around Cambridge with our hosts.

In the U.K. we travelled to Scotland and Cambridge by train – a relaxing, scenic and civilized way to get places. In Germany, we played 5 concerts in 6 days in Munich, Cologne and Bad Zwesten and going by train was just too expensive there, especially with our 2 kids along. So we lined up a rental car out of the Frankfurt airport months before, happy to get a great weekly rate on a small car. Tim would be the primary driver; having lived in Germany for 11 years he was familiar with the Autobahn, narrow city roads, etc. After giving our info at the car rental place in terminal 1 we walked the long, long corridor, for what seems like a mile, to the car lot. There we were handed our keys, and met our car. It was a larger than expected vehicle (good news) but a standard (not good!). (I am sure we requested an automatic.) The thought of walking all the way back to the kiosk to try to change this and delaying our already late departure, was enough to prompt Tim to proclaim: “I’m sure I can remember how to drive a stick.” (He did drive through the Cape Breton highlands in a standard VW Rabbit during a little vacation pre-kids … umm …only 17 years ago…). So, that first day we drove from Frankfurt to a friend’s house in the countryside near Kassel, and, minus a few shudders and sputters, all went just fine.

The next morning we left for Munich. It’s about a 5-hour drive and by the time we neared the city the kids were getting crabby, sick of and poking each other in the back seat. It is an unwritten truth that there is a direct and proportional relationship between the driving task complexity and the volume emitting from the backseat. Even Germans say Munich is very tricky and it’s easy to take a slightly wrong turn. The lanes are very narrow and sometimes twist and turn as you carefully maneuver an intersection. At one such juncture, Tim moved into a different lane by accident (understandable if you are distracted by trying to shift to the right gear, and not stall or gun the engine or sputter, right?) The car behind us started honking, staying right on our tail. At the next intersection, the light turned green, and Tim unfortunately stalled the car. Laying on the horn again, this now-furious driver zoomed next to us at the earliest opportunity. Red faced, he yelled something in German which Tim soon translated: “Why don’t you get some *&^^% driving lessons?!!” 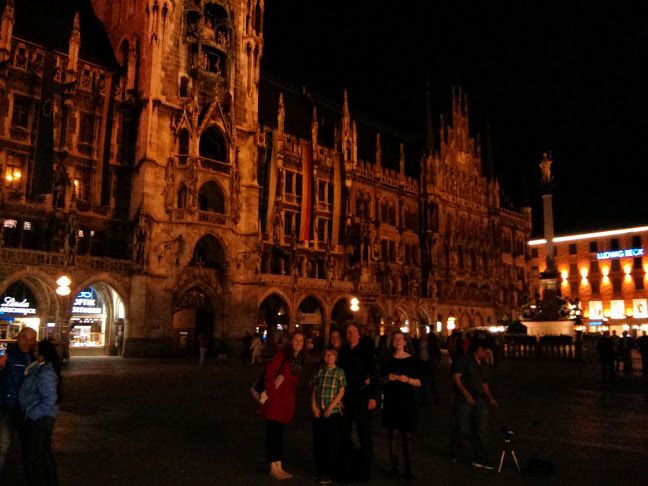 In the main square in Munich.

There were a few more bumps in the German road so to speak but I think I’ll move on to some of many wonderful things about this tour. Listed here in a crescendo-ing order of importance:
-FOOD. Eating ends up having a big presence on any tour. Sometimes it hard to find a healthy and tasty meal and not pay an arm and a leg. But when we had an unexpectedly great meal, like in London at a Vietnamese restaurant, we remember and savour it!
-FRIENDS. When we travel we often end up connecting with many former students, now friends. We love to see them and hear how their lives are developing. Having them show up unexpectedly at our concerts is an added bonus!
-GENEROUS HOSTS. Staying in the homes of kind concert volunteers, or at friends, or friends’ of friends, is a wonderful way to tour. Often you are fed delicious home cooked meals, sleep in cozy beds surrounded by interesting books to read, and are thankfully, driven to your concert! All this really helps you to play your best. It’s also fun to stay in someone else’s home and be part of a different routine. In Germany, that meant tea and cake at 5 and supper at 8. Our kids, since returning home, have wanted the breakfast they had in Scotland each day: egg in eggcup, grapefruit, toast with marmalade and tea each morning! And none of us would say no to a great Cologne bratwurst either!
– MEETING MONIKA. It was so great to finally meet in person the lovely German publicist who worked so hard to promote our Beethoven album! We are so grateful for all her help; we so enjoyed her sunny personality and enthusiasm at our Munich concerts and sharing a meal together afterwards.
-JOYS OF REPEAT PERFORMANCES. There is something about the experience of performing the same piece on many concerts that can give you a unique freedom and openness, a feeling of transcendence. It’s as if the violin, for example, feels suspended and the music is channeling effortlessly through you. One cherishes these wonderful, rare moments so much that they make the whole tour worth every second.
-YOUNG PEOPLE. Munich, in addition to some crazy streets and one angry driver, has some wonderful children whose enthusiasm for music really moves the soul. We played at a school where all the grade 5 and 6 kids had prepared questions for us and had watched our YouTube channel before we got there. They were keenly interested in the music and in our lives and background as performers. When asked to choose the final piece, they picked someone’s work they already knew well and were intensively proud of, Beethoven. Here they are after the concert, getting us to sign their programs. 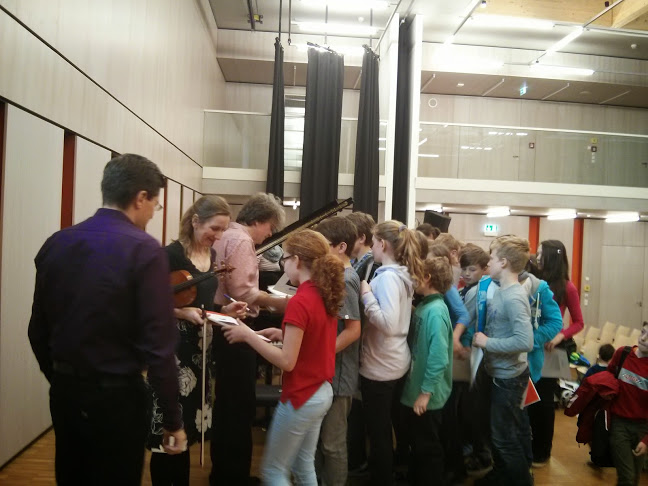 Meeting students after the school concert in Munich.