How to get to Carnegie Hall: Practice and Bring a Shovel!

In February the Duo played to a full house at Carnegie Hall’s Weill Recital Hall! It was a wonderful, thrilling, and hugely fulfilling experience and one we will always remember. We certainly won’t forget the 4 days beforehand either! If you’re interested in this nerve-wracking tale keep reading:

On February 7th, along with our two kids, we fly to Nova Scotia for a concert that was to be a sort of pre-Carnegie Hall prep recital. The concert is to take place in Lunenburg at the beautiful, historic St. John’s Anglican Church as part of the St. Cecilia Series (a highly respected, long standing series), and they secured for us a CBC pickup and national broadcast. We purposely leave St John’s a day early knowing we would have more time to practice if we are away from our university and busy regular lives. After looking at the forecast, we decide to switch our rental car at the Halifax airport from a Fiat to an all-wheel drive Jeep Cherokee. We drive the hour and a half to Lunenburg; the day is beautiful, sunny, clear, but very cold. On February 7th the head of the NS series contacts us to say that the concert may need to be cancelled due to the impending winter storm. February 8th: sure enough, we are informed that the NS concert is cancelled because the storm has been upgraded to a severe and long lasting blizzard originating from the eastern seaboard. It’s being called the “storm of the century” by the media there. (Subtext thoughts: Oh NO! NYC! Panic!). We start to consider leaving immediately for NYC. Looking at flights, there was nothing available that would get us to NY before the storm hits. We contemplate flying to Toronto and then staying there until the storm leaves eastern US. No go: Toronto is socked in with a separate and also gigantic snow blast. We consider driving to Halifax and staying with family in order to be closer to the airport. After talking to Nancy’s brother we decide against it: there would be no piano to practice on. (He also put the thought of missing our Carnegie performance in perspective: “At least you’re still a good person and haven’t killed anyone………yet!”)

Many stress-filled hours later and after considering all possible options, we accept there is nothing we can do but hope that the blizzard will be over by the time of our scheduled United flight leaves at 1:00 pm on the 10th. We decide to park our car near the main road (on NS route 3), a ½ km down a hilly dirt road from the house where we are staying.

The evening of the 8th the blizzard hits. The winds are so fierce we can hardly sleep. On the 9th, we practice, listen to the weather reports, practice, worry, practice. It’s an emotional rollercoaster of psyching ourselves up for the concert and thinking about the ramifications if we don’t make it. All day we keep checking outside to see if the storm is letting up. The snow keeps coming: 20 cm… 30 cm…. 40 cm. The neighbour’s truck gets stuck on the dirt road. We go to bed on the 9th with the storm still going strong.

February 10th: we get up at 6 am so that we have lots of time to get to the airport. It’s still snowing but winds are now only gusting to about 60-80 km/hr. At 7 am the four of us, along with Nancy’s 87-year old father, trudge down the hill through drifts that go up over our hips. We drag our suitcases over the snow inside a push-me type shovel. At the bottom of the road we see incredibly that route 3 has been recently ploughed. The car, however, needs a path cleared in order for us to be able to reach to the road. Tim and Clara start frantically shoveling. At 7:23 a truck with a plough attachment happens by and digs us out. By 7:30 we’re on the road. The highways are snow covered and deserted except for a car coming the other direction every 10 miles or so. (We see three separate Aliant vans in the ditch. Guess they don’t budget for snow tires?) The drive, which normally takes one and a half hours, takes 3 hours.

At the United counter we learn the following: 1) our incoming flight is going to try to land (winds still quite strong for the small Bombardier aircraft so it might be diverted), and 2) if we don’t go out on this flight, there is NO WAY to get to NYC before Feb 11th. All flights, all airlines, with any and all conceivable rerouting are booked for 3 days at least. We watch the incoming flight’s progress for three hours. Miraculously, unbelievably, it lands. Our flight is the first flight for 2 days to leave for New York from Halifax.

Yes! We got to Carnegie Hall! 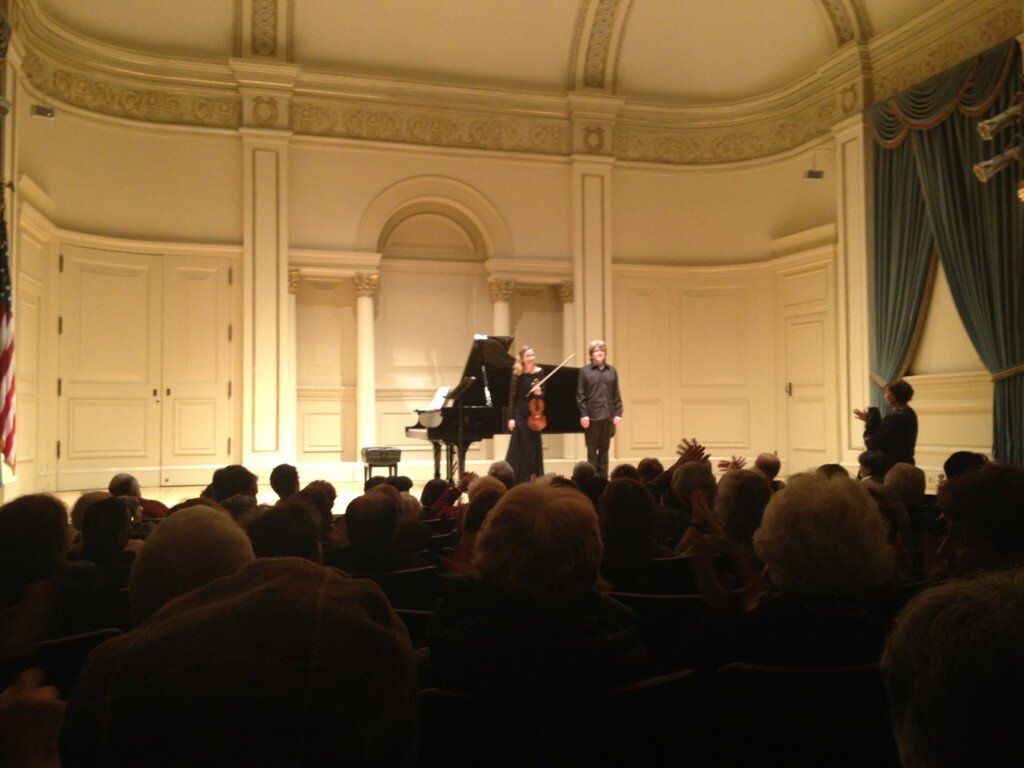