We’re thrilled to celebrate the official release of our new CD J.S. Bach: Six Sonatas for Violin and Keyboard. This is tremendously beautiful music and recording these sonatas was both a richly rewarding process and a somewhat daunting one – the enormity of a genius such as Bach tends to do that!

We’ve put together a short video trailer that tells a bit about our journey with beloved Bach and these six pieces. Our sincere thanks and admiration to Rich Blenkinsopp at Memorial University for his technical and artistic expertise in creating this video. The recording is available through Amazon and ArchivMusik among others.

We’ve just returned from concert tours of the UK and Germany. We played in scenic Wales for the first time and returned to Cambridge University for two concerts. In Germany we played six concerts and logged 2500+ km of driving, which took us from the Cologne area to Leipzig and Dresden, then to Bavaria, and finally ending in Mönchengladbach, north of Düsseldorf. It is always so exciting to play for German audiences because they have such a deep appreciation for and sense of ownership of this music – their music!

Some press quote for the Duo recent Germany tour:
“In Johann Sebastian Bach’s E major Sonata Duo Concertante found a beautiful balance in the slow movements – on one hand not too romantic, on the other not too austere. Their fast movements were performed with ease, lightness and naturalness. Following a very lively performance of the G Major Sonata of Beethoven (op. 96), and after much enthusiastic applause, the audience was treated to two encores: a rousing, spirited and virtuosic rendition of Aram Khachaturian’s “Sabre Dance” and the first movement of the A major sonata by Johann Sebastian Bach.
Rheinische Post (Mönchengladbach)

“Duo Concertante impresses with their technical brilliance, but their musicality is even more special. They play the works of Beethoven, Bach and Schubert with complete clarity … [and] often begin passages as if from nothing and grow to explosive climaxes. The Schubert in particular unfolded as if from within a vast orchestral soundscape. This recital was a highpoint of the Pianoforte series. “ Rheinische Post (Xanten)

“The Duo captures extreme changes in mood – from despondency to joyousness – with vitality, and always in synchronicity. As an encore the Duo presented a spirited, vigorous and wild Khachaturian’s Sabre Dance, precise down to the last note. There was tremendous applause for the inspired playing of these two artists of international stature.” Augsburger Allgemeine 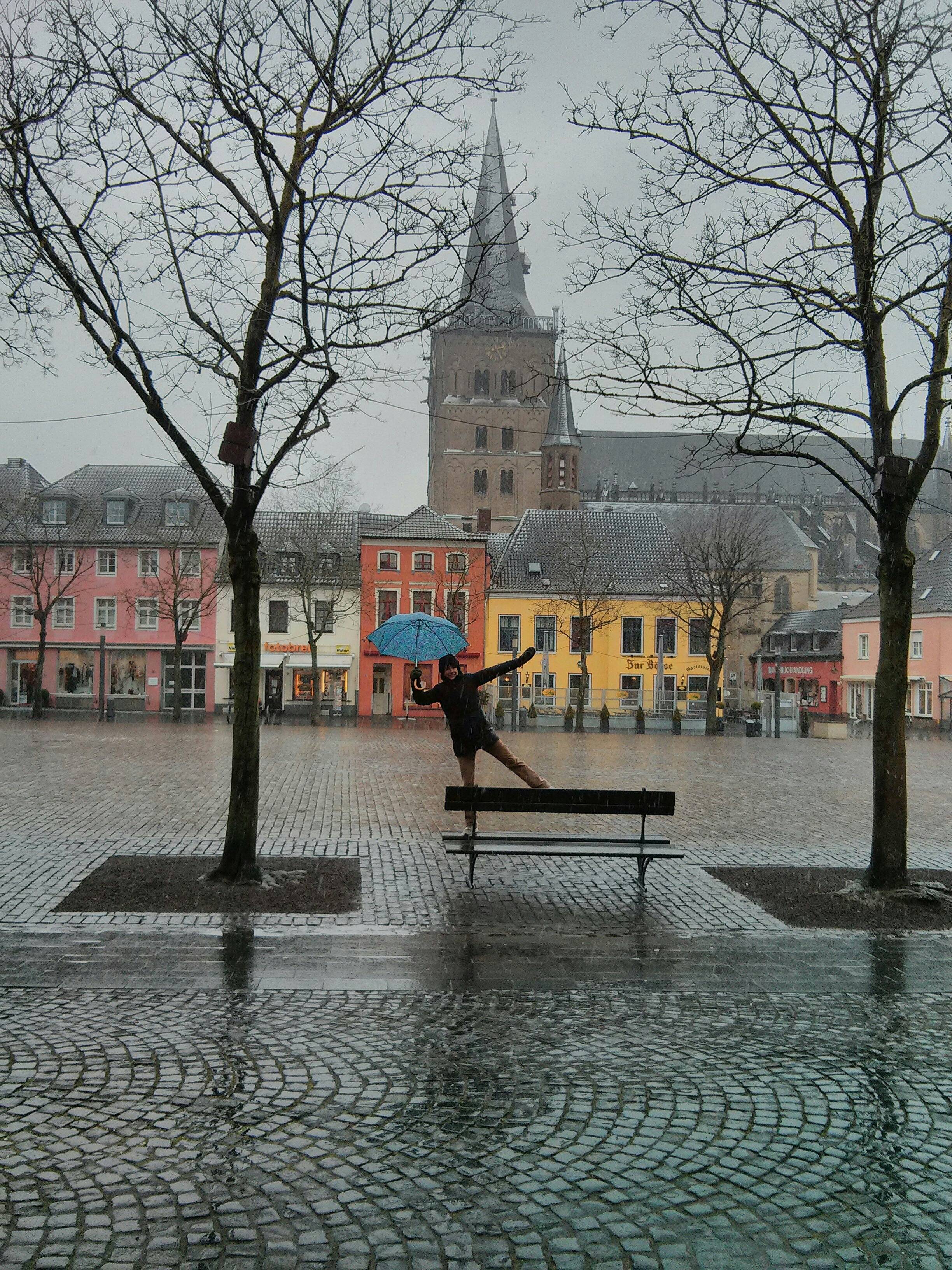 Nancy dancing in the rain in Xanten