This summer was difficult, exhausting, heart breaking but also deeply intense, almost magical. Tim and I spent much of it in Nova Scotia with my mother who was very ill with congestive heart failure. Throughout I tried to keep practicing – often in hospital chapels or boardrooms – because we had a recording of new Canadian music at the Glenn Gould Studio in early July and then about eight other pieces to learn for the Tuckamore Festival in early August and other performances throughout the summer. We were also scheduled to teach at Domaine Forget in mid July but I was granted leave and stayed behind in order to be with my mom. On August 1st she died. I’d like to write a bit about how she helped me become a musician. 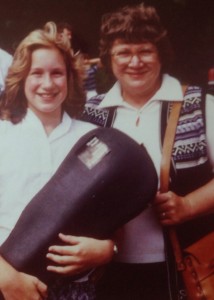 My mother loved music and was a pretty good amateur cellist. An ideal day for her would include a couple hours of cello practicing, working in her gardens, swimming in the lake on their property in rural Nova Scotia, reading, having a lively/heated/well-informed conversation about the state of world and the sundry characters in government, and playing Scrabble. She had a deep appreciation for the beauty and miracle of the natural world and it somehow seemed intrinsically connected to her love of the arts – music, literature, and poetry in particular.

As a kid she took me to many concerts, plays, and to the ballet when it came through Halifax. I treasure the memories of being “dragged” to concerts, like when I heard the Beethoven Violin Concerto live for the first time at age eleven (Afterwards Mom let me stay up practicing until 1:00 am). For years she would drive me to lessons 100+kms away in all kinds of weather so I could have excellent violin and piano teaching. When I practiced she would often listen, and this kept me focused – there were many “discussions” about whether a certain passage was actually really in tune or not! I loved that she would encourage me to skip school if there was a trivial class scheduled (like Home Ec.) so I could play music or just do something more interesting at home.

I remember many beautiful summer days when we would walk together through the woods in Nova Scotia and she would point out things– “star flower,” “lady slipper,” “pitcher plant,” “listen: the sound of the loons.” She loved ordering her seeds every January in anticipation of another growing season (she grew almost all their food for the year). The miracle – of these tiny seeds yielding a bountiful harvest months later – never ceased to delight her. Today if I start to worry in the middle of the night I summon a feeling I had as a kid: lying in a field on my back next to her, looking up at the clouds and feeling the warm summer wind on my face. If I have the ability to appreciate –even a little – the tremendous gifts that are the natural world and music, I owe this to her.

When my mother was sick in the hospital for much of July, I would lie next to her in her hospital bed and we would listen to music together, one earphone in my ear, and one in hers. In the midst of the mix on the IPod was the slow movement of Mahler’s 5th symphony – probably the most beautiful orchestral piece ever written, a sonic representation of the most tender, deep, unabashed, and purest love. I will always remember holding her hand as we listened to this together – ever grateful for it and for her.

The day after she died, I was practicing in the comforting surroundings of her bedroom, trying to prepare for Tuckamore, which started 3 days later. At one point, for some reason, I stopped playing and opened a drawer in her bureau. There inside lay a cassette labeled “Music to be performed at my memorial as people assemble.” Mom had likely made the tape at least five years prior (when her double cassette player still worked). My father and I had not known of the tape’s existence. After tracking down a cassette player, I listened to the music she picked. One of the pieces was what I was just practicing – the exquisite slow movement of Beethoven’s Harp quartet, which I would perform 9 days later. Another was the Bach’s Erbarme Dich from St. Matthew’s Passion which Bach paraphrased in his Violin and Keyboard Sonata in C minor. At her memorial, Tim and I played this for her; our children played Saint-Saens’ The Swan with Sasha using her cello. It was a small testament to the legacy of her love of music and our immense gratitude for her and the lives she led us to.